The Best Motorcycle GPS in 2020 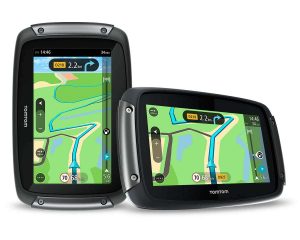 A highly attractive price point, incredible mapping, a large screen, crash proof, and easy to use. The TomTom Rider 550 ticks all the boxes and is without doubt the best motorcycle GPS in 2020. Read my full review below.

The Garmin Zumo 396 runs the TomTom Rider 550 close in terms of pricing. And the large 4.3 inch display is nice and bright, and performs well in sunlight. But I found TomTom’s interface much more user friendly than Garmin’s, which was the clincher.

I was very close to going for a Garmin Zumo 595LM. It tops most list of the best motorcycle GPS and it’s easy to see why. Feature wise it’s jam packed, and there’s a whopping 5 inch dual orientation touch screen display, which means that it’s going to be easy to follow your route at a glance while riding. The bluetooth connectivity is also great and extremely reliable. But again, I prefer TomTom’s interface, and I feel that it has more motorcycle specific features, which was why I chose the Rider 550.

Not a fashionable brand, but as the name suggests, BikerWay is specifically designed for motorcycles. It’s the cheapest motorcycle GPS I considered and has a fair amount to like, including a nice bright 4.3 inch touch screen, lifetime map updates, and plenty of bike specific features. I liked the look of this a lot, but in the end decided to opt for a more recognized brand.

Review: Why The TomTom Rider 550 is the Best Motorcycle GPS in 2020 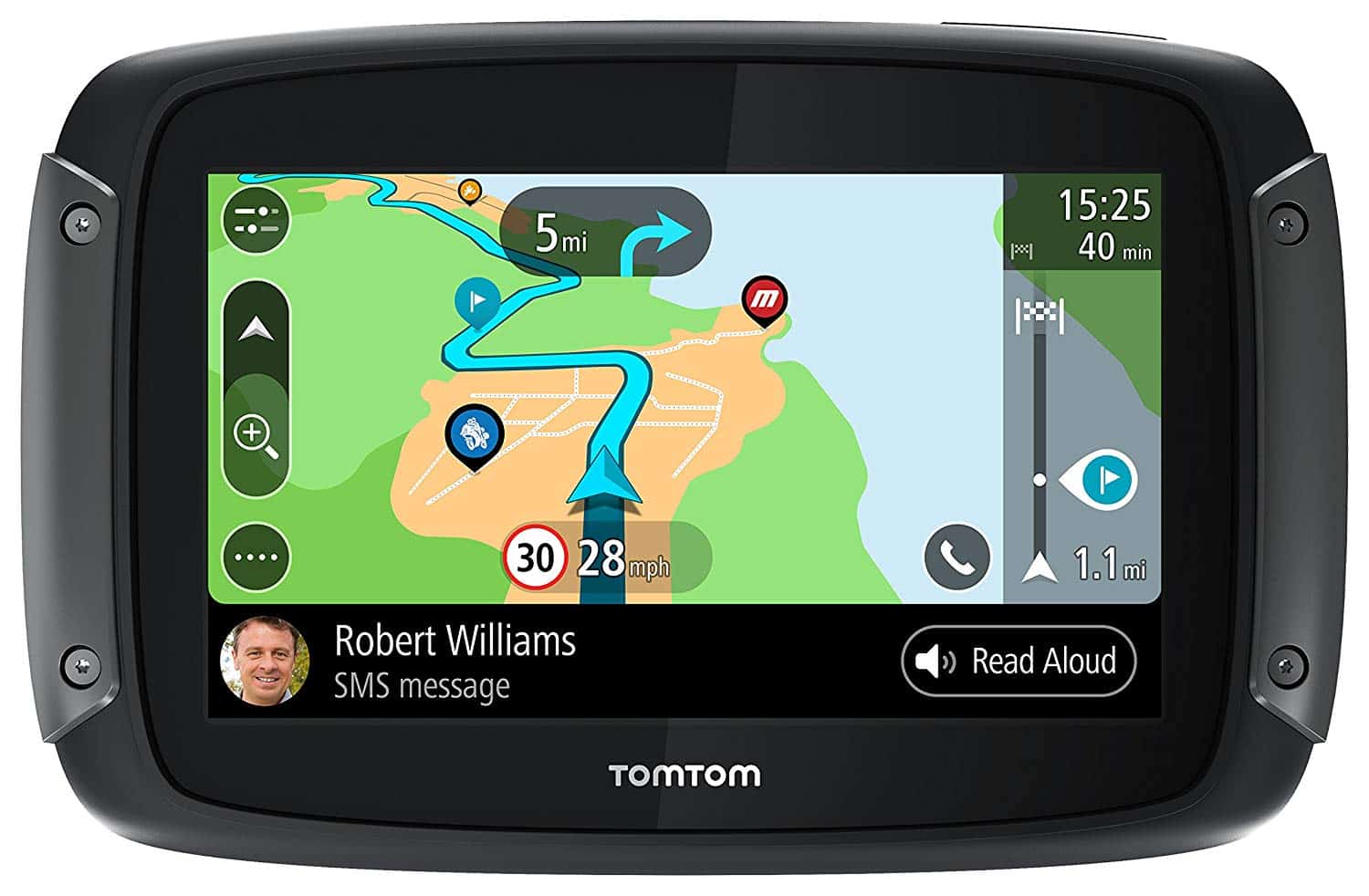 In my review of the TomTom Rider 550, I’ll cover everything you need to know to decide whether this is the right unit for you.

The one thing I want to make clear here is I didn’t have a budget; I was happy to spend $600 or more for the best motorcycle GPS.

Simply put, the layout of the TomTom 550 Rider means it’s much easier to use, and the features sail to adequate and beyond; all of which I’ll cover below.

Stretching to $600 plus for units like the Garmin 595LM, I honestly didn’t see me getting a gain in terms of motorcycle specific features, and the usability looked to be sub-par compared to what the TomTom 550 Rider had to offer.

So, whilst in general I’ll pay over the odds to get the very best, in this case, the best motorcycle GPS wasn’t the most expensive. TomTom offers the smart choice for motorcycle riders, and compared to the likes of the Garmin 595LM, gives us a few extra bills to rub together for our next adventure…cha-ching! 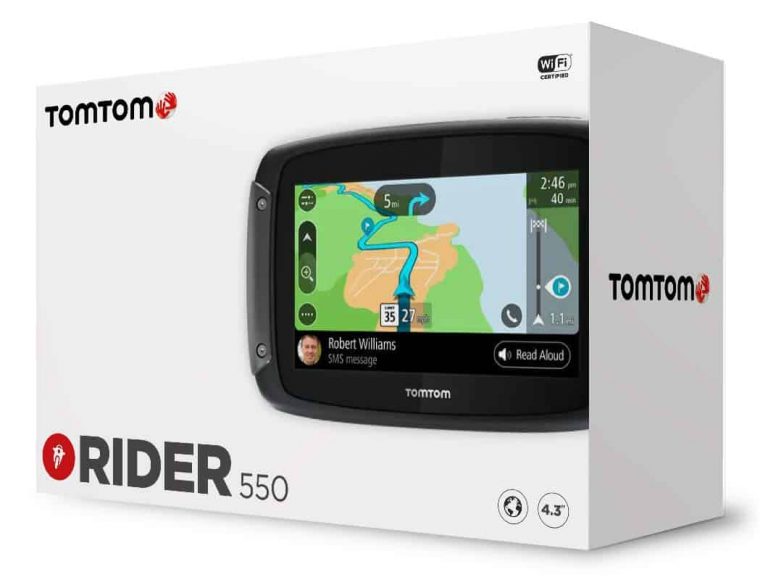 You’ll get more than you think with the TomTom 550. Included in the package is:

It’s worth checking all that’s going to be included if you purchase an alternative motorcycle GPS. RAM mounts alone can cost in excess of $65!

One of the best things about a motorcycle specific GPS, is that they’re weatherproof and drop-proof. You won’t get that with a typical GPS, and that means it’s not going to last very long. Here’s what I think of TomTom’s protection so far…

Obviously, I didn’t want to fork out this kind of cash, and purposely drop my new GPS, just to see if it would break.

As it happened, a week ago I had my first motorcycle accident, an odd low-speed high side, and my TomTom 550 had a front row seat.

How hard a hit it took I can’t be sure, as I was cartwheeling towards the curb at the time. What I do know, is the crash was bad enough to cause thousands in damage, and the impact was hard enough to blow my visor clean off my helmet. 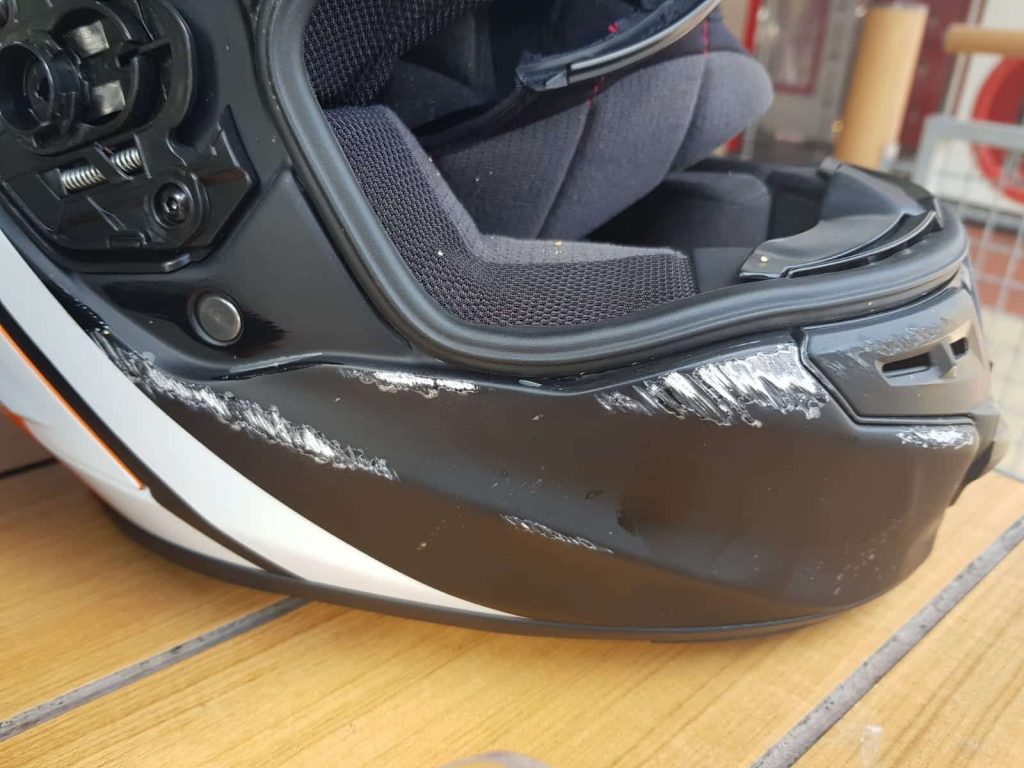 The RAM mount is intact, but there are some scuffs on the TomTom. It definitely took a hit, and it definitely still works… 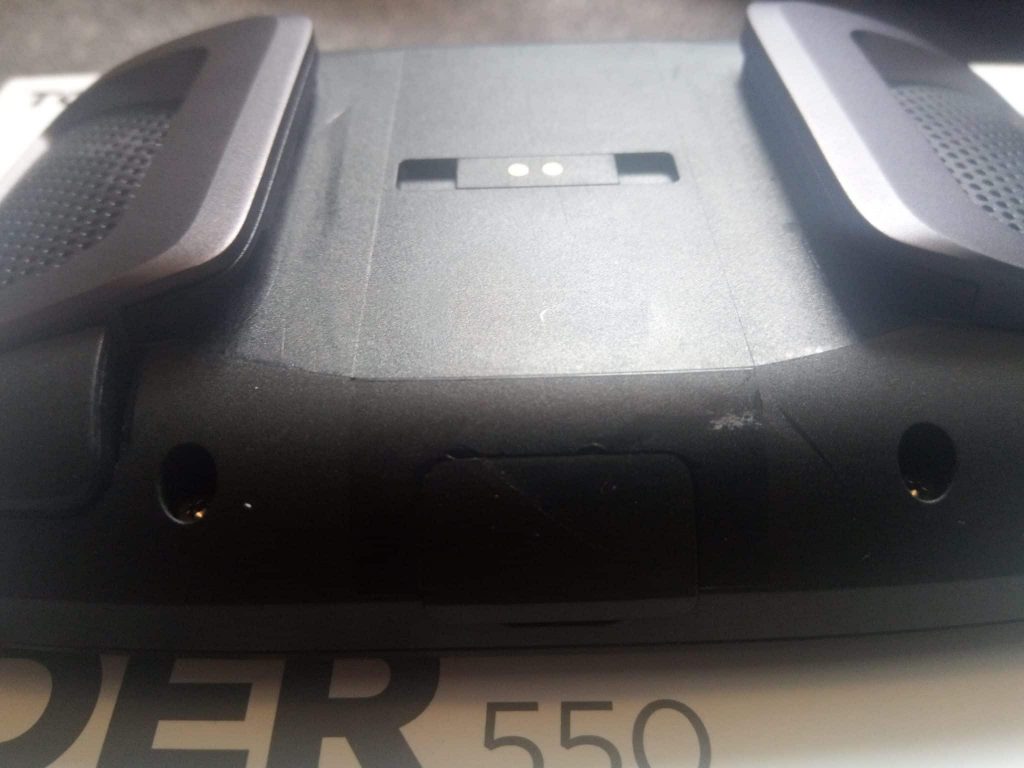 I live and ride all year round in the UK. It goes without saying the weather is flawed here, more often than not. Basically, it rains heavily, and all the time!

So, I can say for sure that the TomTom Rider 550 is weather resistant. More importantly, drops of rain don’t interfere with the smart screen; something I saw a lot of people complaining about with other motorcycle GPS units (even the more expensive ones) as I did my research.

There’s a tidy little feature built-in to the 550 that allows you to select how twisty you want the roads to be on your route. It looks like this, and has three settings: 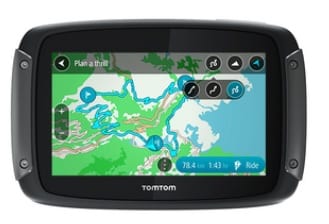 It’s worth making a mental note of the types of roads surrounding you, and here’s why. I ride in Wales a lot, and hitting the windiest of settings is going to mean I spend all day on dirt tracks. I ride an MT09, so I don’t want that.

Typically, the middle setting is going to be the best all-rounder, unless dirt tracks are your thing.

You’ll get lifetime map, traffic and speed camera updates from TomTom, and you can get those updates via Wi-Fi.

I make a habit of charging my TomTom 550 via the USB charger. Then, I’ve not only got a full charge before I leave for a trip, I’m also up to date with maps and what-not too.

I’ve seen it mentioned that the 550 will last around 8 hours.

I’ve only used it for around 4 hours without charging, and there was more life left in the TomTom, than there was in me.

According to TomTom, the 550 Rider’s battery life is in the 6 hour range. So, if you turn it off at way points, you’ll pretty-much get yourself a full day out of it.

It comes complete with a 4.3” smart screen, and in my opinion, it’s plenty big enough, not to mention ridiculously easy to use. 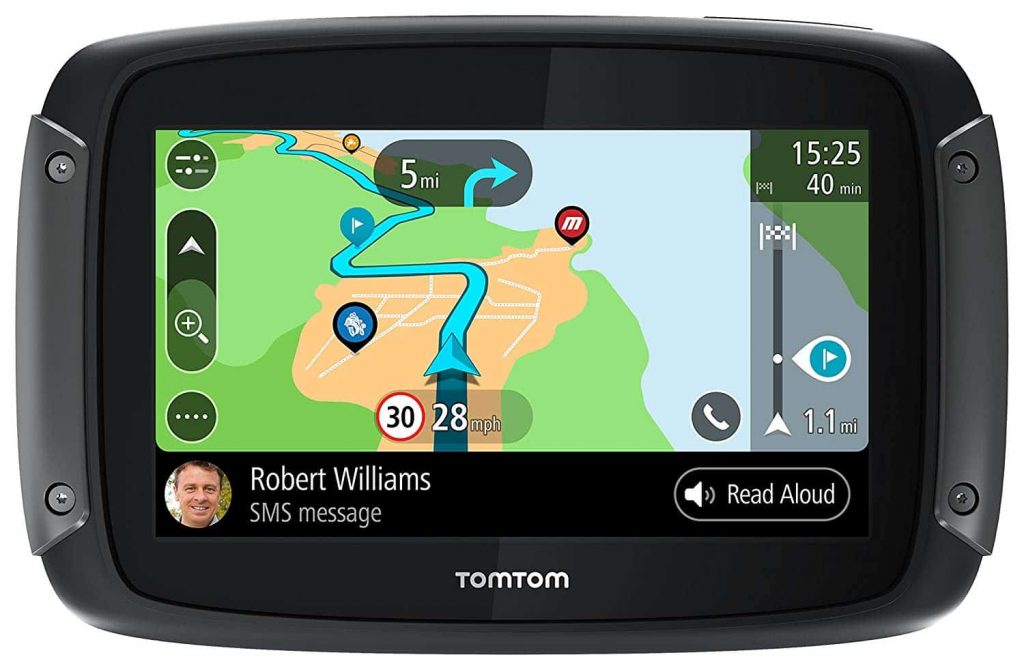 You’ll sometimes have to do a double tap when wearing leather gloves. So, if you’re planning a route, rather than just hitting “Ride”, I’d just suggest taking your gloves off and getting set up properly.

Unfortunately, making the screen any more sensitive is going to mean that rain activates parts of the smart screen, and you’d end up having to stop to reset your route.

I’ve been planning some routes on Furkot to ensure I don’t aimlessly ride round on sub-par roads.

I’ll be able to load up a tonne more than the nine routes I’ve added so far, due to the fact the Rider 550 has 16GB internal, plus a MicroSD slot.

Where I live, the roads aren’t great. It takes us 20-30 minutes to get anywhere decent, hence why I generally plan routes on Furkot, choosing roads listed on Best Biking Roads.

But, on occasion we’ve got nearing to a mid-point on our ride, and realised my route is just too short. The option here is to extend the route by using the “Plan A Thrill” feature, which will allow you to set way points, and find the best roads that connect those waypoints together. 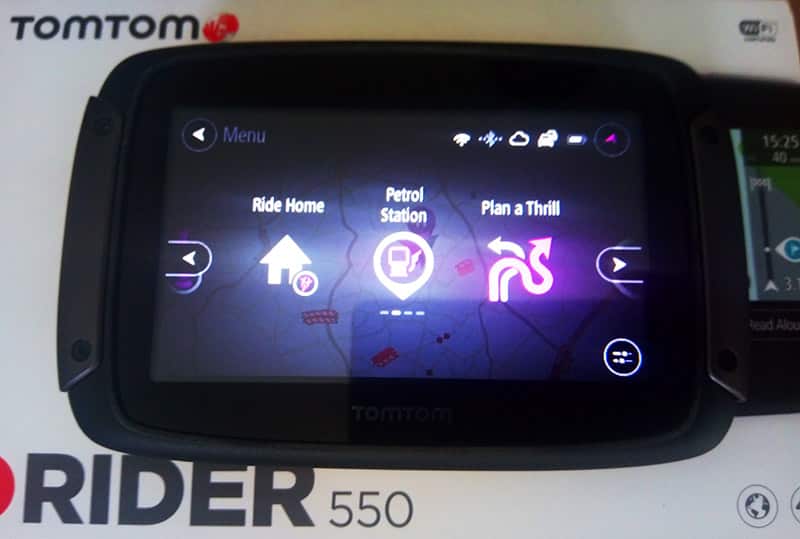 I’ve used this feature a couple of times, and it’s found some top quality roads. It’s also an awesome feature if you’re not the route planning type, simply “Plan A Thrill”, hit a few way points, and off you go!

If you have planned a route and have added a thrill onto it, like I did, simply ride until you’re bored. You can then reload your original route and click “Ride to nearest point on route”, to get you back on track.

Phone addict? Fear not! There’s the option to connect your life smartphone directly to the 550, and any messages that you receive will be read out loud, so you can keep your eyes on the road. 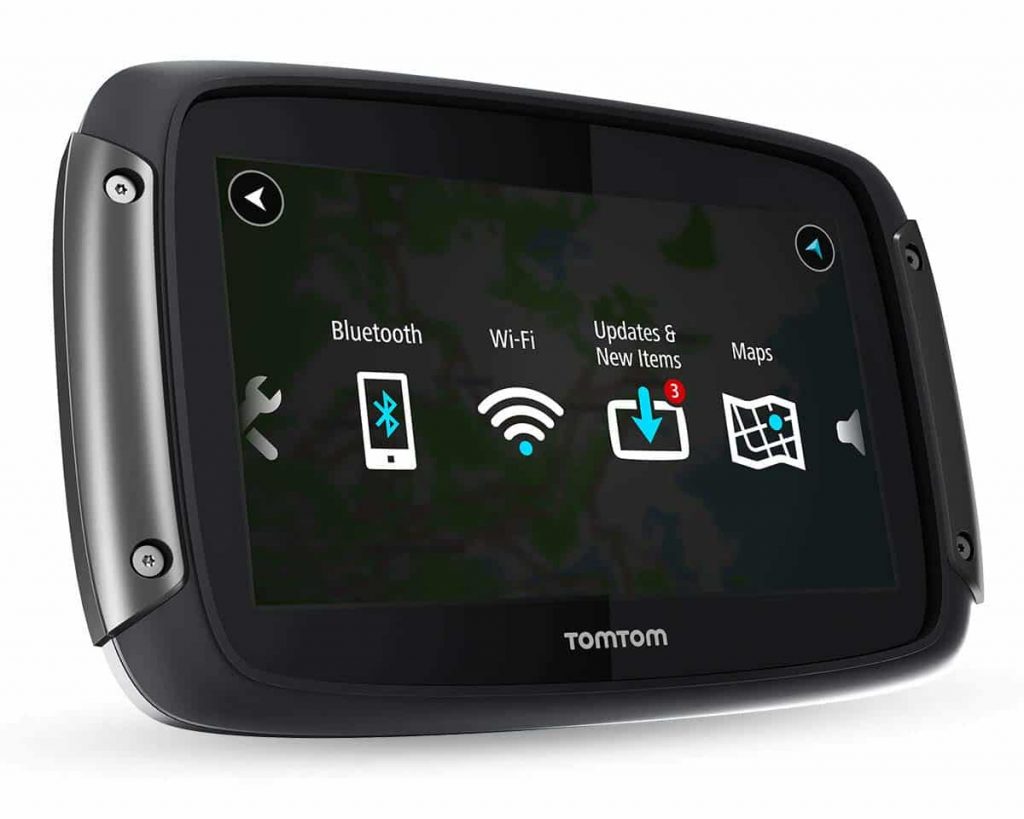 You’ll then be able to use Siri or Google Now to make and receive calls.

In comparison to its predecessor (the Rider 400), you should expect load times to be around 5x faster (happy days!), which is particularly important if you’re loading up huge routes.

And, that’s because the old Rider 400 uses a single core processor, whereas the 550 Rider uses TomTom’s upgraded quad core processor.

I did contemplate the TomTom Rider 400 a while back. At first glance, they seem to bear similar characteristics. But, digging deeper into customers reviews and motorcycle magazine articles reveals two very different beasts.

Owner’s and reviewers of the TomTom Rider 400 were worrying me, mentioning things like:

Regardless of price, that’s just, well…useless! And, I’ve had none of those issues with my 550.

I spent hours and hours (actually, days), digging through reviews of the TomTom Rider 550, comparing it back to back with the likes of Garmin 595LM, which is much more expensive.

I didn’t just convince myself the TomTom Rider 550 was worth the cash, but also that it was more suitable than the Garmin 595LM, and I’m glad I did.

If you’re looking for the best motorcycle GPS that offers excellent value for money, awesome mapping options, long battery life, sturdy protection and more; the TomTom Rider 550 is the one for you…