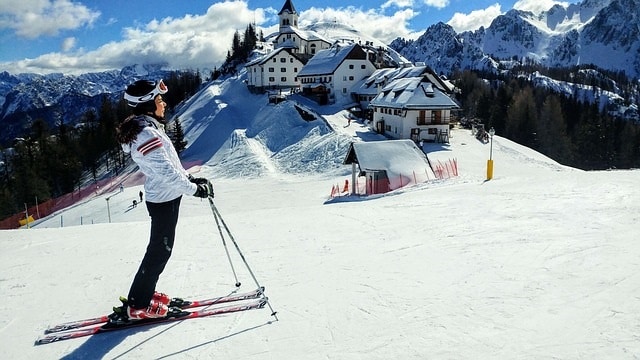 So, you’ve ploughed through our guide on how to snowboard / how to ski.

Now you’re looking hit the slopes, but don’t know when the best months to go are?

You’ll find a tonne of guides online saying that ski resorts open from the end of October, right through until mid-April.

Which is true. But, there are certain months you want to avoid ski resorts completely, if you want guaranteed powder.

The Worst Months In The European Ski Season

You don’t want to be going skiing or snowboarding at the beginning or towards the end of the season.

For most resorts, that means you should avoid the first two months:

And, the last two months:

For snowboarders and skiers, the perfect make-up of snow, is powder.

Powder is freshly fallen snow, and it’s a constant flurry during the middle of ski season (December-February in most resorts).

Outside of these months, temperatures go well above freezing, then drop again.

That melts the powder, then refreezes it.

Essentially, you’re riding on ice, and that’s just not as fun.

Most resorts will publish their dates for their official ski season. Like the months mentioned above, you want to avoid at least the first and last months of their season. 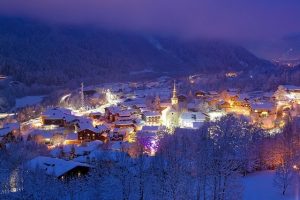 Don’t be tempted by the low-priced package holidays!

They’re low priced for a reason; nobody else wants to go!

Typically, slopes will extend their season by using snow cannons on the lower end of the ski runs in off-peak (i.e. poor snow) months.

In Bulgaria, I went as late as March. The snow cannons were in use, but it’s pretty-obvious when you hit a patch that’s not cold enough underneath, as the snow melts quickly.

(If you’re planning on going to Bulgaria, Bansko specifically, the Dec-Feb 100% applies here; I can tell you that from personal experience.)

Which brings us too…

Check The Altitude Of Your Resort & Ski Slope

Typically, the higher a ski slope is, the colder it’s going to be. That means there’s much less of a chance that snow melts and refreezes. That’s a good thing…

Resorts over 2,000m are the best, but they’re not exactly in abundance throughout Europe.

So, just look for the ski slopes that finish at the highest altitude.

Thanks for reading our 2-minute guide to the European ski season, and the best months to book your trip.

Love snowboarding as much as me?

Jump on our email list and I’ll drop you a line when I post up something new.

And, don’t forget to bookmark our snowsports page and drop by soon.