You are here: Home » BMX » How To Do BMX Tricks 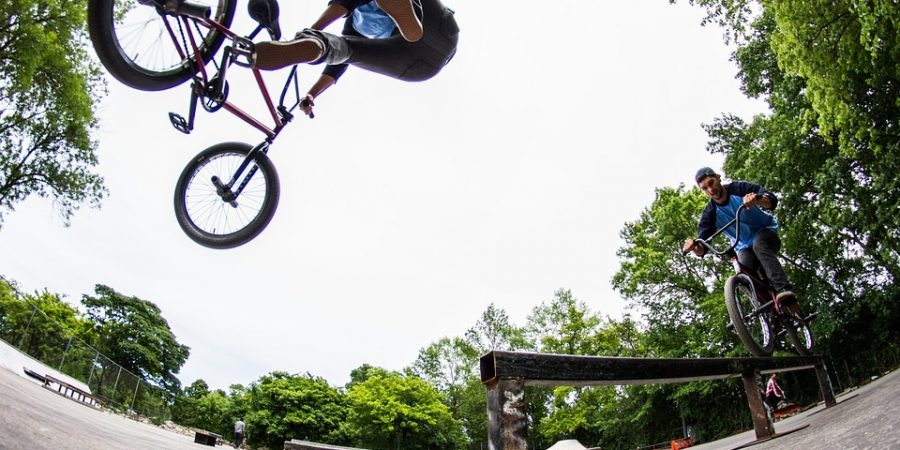 This is part 2 of our beginner’s guide to BMX.

If you’re anything like me, you’ll be trying to learn tricks online, before you’ve even bought a bike.

Hey, there’s no harm in that!

Below we’ve created a quick guide on how to learn to do BMX tricks. There’s some short explanations, with videos to help you learn too.

If you’re a beginner looking to learn some basic BMX tricks, we’ve got you covered here!

Warning: You shouldn’t attempt any BMX tricks without the right protective gear. That includes shoes, elbow pads, knee pads and a helmet. To get started, we’ve reviewed BMX helmets here.

An X-Up is a trick that you do when you take off; either via a bunny hop, manual or jump.

When in the air, you’ll turn the bars 180 degrees.

You’ll need to get them back straight before you land. And by straight, I actually-mean straight.

Being just a few degrees off straight, especially if you’re travelling at speed, will unsettle the bike and probably lead to a crash.

How To Do An X-Up

What Is A Manual?

Learning to manual is one of the first BMX tricks you’ll learn as a beginner .

A manual is a prolonged period on the real wheel only. It’s like a wheelie, but without the use of pedals to keep the front wheel in the air.

Basically, there’s a lot more skill involved in a controlled manual, than there is with a controlled wheelie.

Instead of using pedal power, you’ll rely purely on your balance to keep going with a manual.

It’s not only one of the first tricks you’ll learn, it’s also one of the most important.

You’ll learn where and how to adjust your centre of gravity, and the balance point on your bike.

That’s going to be useful when it comes to learning how to do other tricks.

How To Do A Manual

What Is A Nose Manual?

A nose manual is a normal manual, on your front wheel.

We say that like it’s easy. For beginners, it’s almost definitely not.

Learning a normal manual on the rear wheel is hard enough, but learning a nose manual is something else.

Here’s a quick video to give you a few pointers.

How To Do A Nose Manual

What Is A Bunny Hop?

Another one of the important BMX tricks you need in your arsenal as a beginner, is the bunny hop.

A bunny hop on a BMX is a jump without, well, the use of an actual jump or lip.

You’ll lift the front wheel and flick up the rear to get some air.

It’s useful for jumping on and off obstacles.

How To Do A Bunny Hop

You’ll use a combination of what you learnt during manuals and bunny hops, and add a 180 spin into the equation.

This should, even without a jump or lip, give you the ability to flip the bike round and ride backwards.

And, that’s all good in theory…

What Is A Hip Jump?

A hip jump is where you change direction in mid-air.

So, instead of the landing being dead straight, it might be 45-90 degrees to your left or right.

And, it’s not as easy as it looks. The force of you travelling forward on your BMX, naturally takes you forward as you take off.

Steering the bike towards the hip jump landing takes a bit of finesse.

How To Jump A Hip

A drop-in on a BMX allows you to get into ramps, such as verts and quarter pipes.

The drop-in from the top of the ramp gives you speed that you can maintain, by carving and pumping on the ramp.

This is one of the things I found looked much scarier than it was.

Dropping-in is an all-or-nothing type of thing. It’s not like a manual or a bunny-hop where if you fail, nothing happens.

If you fail here, you’ll bail hard. So, the hardest part is getting in the right mindset to drop-in with confidence.

How To Drop In

Next: Where To Ride BMX