You are here: Home » Features » All-Time Royal Rumble: Which Wrestlers Have Spent The Longest Time In The Ring? 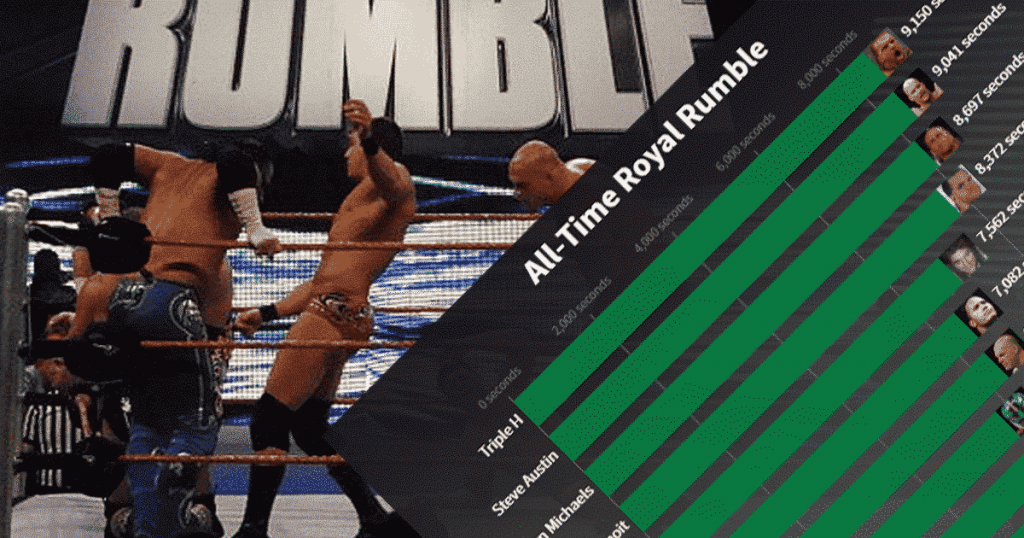 To find out, we teamed up with our friends at SportBible to dig into 33 years of Royal Rumble data. And we worked out which wrestlers have spent the longest total time in the ring between 1988 and 2020.

We’ve got a full list (with over 300 wrestlers) below. But let’s start with this live graphic, which shows the all-time top 10…

Share Tweet So, in terms of total time spent in the ring, Chris Jericho is the clear all-time Royal Rumble champion. Jericho has spent a total of 4 hours, 56 minutes, and 15 seconds in Royal Rumble matches to date. Which is almost a full hour more than second place Triple H, who has racked up 4 hours and 50 seconds in the the event.

Note: some wrestlers have competed in the event under different ring names. For example, Triple H competed as Hunter Hearst Helmsley in 1996 and 1997. In our live graphic and full table below, we listed each wrestler under their best known name. Click below to see a list of wrestlers which were combined.

Click to show wrestlers who have competed under different ring names

Here’s the full table showing all wrestlers who competed in at least one Royal Rumble between 1988 and 2019. Included is the number of Rumbles each wrestler has competed in + their total cumulative time spent in the ring.

This year’s Royal Rumble takes place on Sunday 26th January at the Minute Maid Park in Houston, Texas. Who will be the last man standing? We’ll find out soon!

Note: we used a number of sources to ensure the information in the table is accurate, however, if you believe we have made any errors, then please contact us for correction.