You are here: Home » Motorcycles » Grip-Lock Review: The Best Motorcycle Lock In 2020? 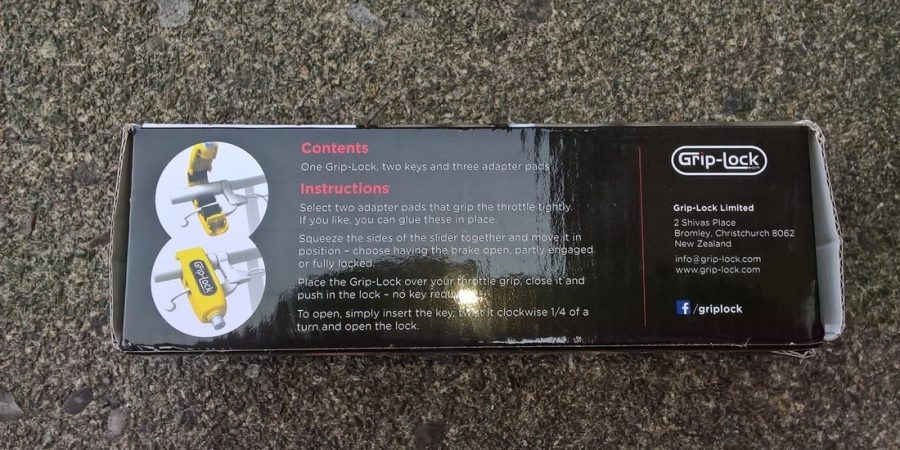 After going on a motorcycle tour with my cousin, I noticed he was using a Grip-Lock for bike security. Not one to be left out, and thinking it was a good idea, I decided I’d go ahead and grab one too; they’re only around $65.

Is the Grip-Lock the best motorcycle lock available this year? I tested it to find out.

I currently use an Oxford disc lock, ground anchor, chain and additional lock. But, enough is never enough when it comes to bike security. And, as I’m upgrading to a new and more expensive bike soon, I want all the bike security I can get.

Out of interest, I sent a link to the Grip-Lock on Amazon to three biking buddies, to see what they thought.

Which led to me having to answer a few questions.

Can’t bike thieves just remove the brake lever, then slide the Grip-Lock off the bars?

Well, they could possibly remove the brake lever depending on how your lever seats in its housing, but they wouldn’t be able to on mine.

And even if they could, they’d be riding round with a Grip-Lock on the throttle all day.

It doesn’t rely on brake tension to lock in place, instead, it clamps the handlebars.

How easy is it to get off the throttle?

Not easy at all.

There are different inserts, ensuring you get a solid clamp on any bar size in the 27mm-42mm range.

With some force, it does start to give (slightly). But, you’d absolutely ruin the throttle housing getting this off. And, there’s no way it’s going over bar ends.

Can’t thieves just smash it off?

It’s not as easy as it looks to remove!

When I worked at a plumbing merchant, I used to park my GSR 750 on the front car park. It was clearly visible from office blocks, and our office window. 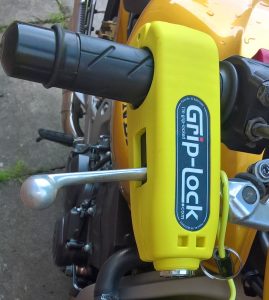 Did that deter three bike thieves jumping on it to smash off the steering lock? Of course it didn’t.

Eventually, they were scared off by an angry motorcycle-plumber, but not before giving me a repair bill of $500.

Fact is, combined with a disc lock, steering lock and a chain, it’s a mammoth task to steal a motorcycle, especially when it’s in a public place. Add a Grip-Lock into that equation, and their job just got a whole lot harder.

But, no one form of motorcycle security is useful on its own.

Steering lock? Smash it off and they’re away. I’ve seen how easy it is to do. And now, I know how to do it in less than 30 seconds.

Chain & lock? Unfortunately, bolt croppers are readily available, and using these on the weld on a link, makes mincemeat of any chain.

Disc lock? Disc locks are ridiculously annoying for bike thieves. Unless they know exactly how to break that kind of lock, they’re going to need a grinder. That’s loud, time consuming and an all-round pain in the backside.

Grip-Lock? Likewise. How do you even get these things off?

But, even with disc locks and the Grip-Lock, they could lift the bike into a van, take it to their chop shop, and remove it there.

Like I do on my bike, you should combine all possible security measures, rather than picking just one.

One problem I have, is I tour a lot. It might not be for weeks, just a few days at a time. But, carrying enough kit to secure my bike, can be a pain.

I’ve invested in a lightweight chain (which is still too heavy) and take my disc lock along. I’m not sure how confident I am in that chain, to be honest.

So, having the Grip-Lock come along for the ride is perfect. It only weighs 330g and is a similar size to a standard disc lock, so when it’s stuffed in my roll bag when I’m on the move, I don’t even notice it’s there.

So, Should You Buy A Grip-Lock For Your Motorcycle Or ATV?

Put simply? Why wouldn’t you. Any deterrent is a good one, regardless of whether it even works or not. And, Grip-Lock in my opinion, works.

I could see an experienced bike thief being able to remove this in 5-10 minutes. And, I know from watching CCTV footage of my mate’s bike being stolen years ago, that’s not the kind of time the scum of the earth are willing to invest in a single bike. They expect to be in and out within 2-3 minutes.

Combine that with a few minutes for each additional bike security measure you have in place such as a disc lock, chain and steering lock? That equals a lot of effort.

And the fact is. There are easier targets than ones with layered security like ours. Let’s face it. People steal, because they’re too lazy to earn their own money. They’ll steal bikes that have little or no security, before they steal yours.

I’d recommend any additional motorcycle security measure to any owner of a motorcycle or ATV, and that includes Grip-Lock.

You can get yours here, they’re currently available for $65, and worth every cent.