There are a ton of great skateboard brands around right now, but with so much choice which brands are the cream of the crop? We considered them all, then whittled down our final list to just 9. We’re confident in saying that these are the top skateboard brands on the planet.

Looking for specific deck recommendations? Check out our guide to the best skateboard decks this year.

Here are the best skateboard brands in 2020. Buy a board from one of these brands and you won’t go wrong. 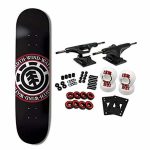 Now 25, he’s one of the most successful skaters in the world.

What does that mean for him? Well over $2m in earnings. That’s what.

What skateboard decks does he use? You guessed it. Element.

He’s one of the thousands of skaters that think Element make the best skateboard decks in the world.

Why? Here’s the thing about the deal between Element and Huston.

Did he make it big, then ride with Element simply for a HUGE endorsement deal?

But other action sports pros do that, right?

Huston has been skating with Element since he was 7, and you can bet he wasn’t getting paid more than a few candy bars back then.

The fact he chooses to stay on Element’s team?

Our favorite deck from Element? Hands down, it’s the Element Seal. 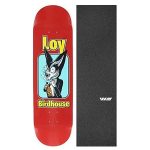 Heard of Tony Hawk? Of course you have.

Well, Birdhouse is his company. So you can bet your ass that Birdhouse are producing some truly high end skateboard decks.

Need proof? Here’s the man himself (and his crew) shredding it on Birdhouse decks:

What else is cool about Birdhouse? Their decks are thicker than most boards, which will add pop and help with flicks and tricks.

Our favorite Birdhouse Deck? We like the David Loy.

He went on to grab the Transworld Skateboard Magazine’s “Rookie Of The Year” and has been a big part of big events like the SLS ever since.

Like Nyjah Huston and Element, Malto still uses the same deck brand he was first sponsored by; Girl Skateboards. So, no, they’re not just for girls.

One day he’s rocking round Kansas City. The next he’s sponsored by Nike and getting skateboard decks named after him. 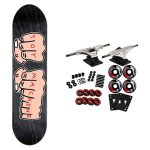 The name says “Toy”, but don’t let that fool you. These are SERIOUS skateboards, endorsed by SERIOUS riders such as Billy Marks, Ed Templeton, and Josh Harmony.

And they’ve been around for a while. Here’s a super retro video from 1996 titled “Welcome To Hell”, which demos some of their boards from back in the day:

Toy Machine boards tend to have simple, vibrant designs that pack a punch. Quite literally in the case of “Toy Machine Fists” (our favorite deck from the brand).

You won’t get too many frills or tech, but what you will get is a solid 7-ply deck with plenty of pop.

Our favorite? As we said above, it’s the Toy Machine Fists. 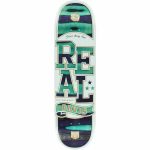 There’s a good chance you’ve heard of Real Skateboards. Like the Toy Machine, Element and Birdhouse, they’re a big player in the skateboard deck industry.

Here’s the thing about building a professional skateboard team.

You can’t just pay skaters BIG money to use your decks. That paycheck has to be coupled with a deck that they actually like.

And, the list of big names on Real Skateboards pro team that love their decks is HUGE. 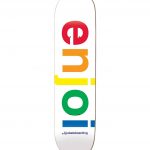 Enjoi skateboard decks are the most underrated on our list.

They’ve been handcrafting some of the best skateboard decks in the world, since professional skateboarder Marc Johnson started the company back in the 2000s.

And, we’re a sucker for their designs.

There’s a tonne of pro skaters on their team including:

Want to know what video games looked like back in 1999?

And, it features pro skateboarder Andrew Reynolds, the owner of Baker.

If you’re a pro skater, and you just can’t get a deck that suits you, what do you do?

That’s what Reynolds did in 1999, and Baker has been killing-it in the skateboard scene ever since. 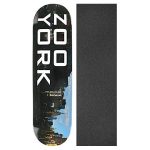 Back in 2012, Chaz Ortiz made history by being the first person to win the Dew Tour.

He started skating back when he was 6 and eventually turned pro at 14 when he official sponsorship from, you guessed it, Zoo York.

And he’s been skating their decks ever since. 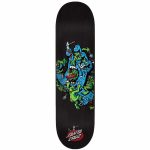 So, here we are. The last of the best skateboard brands on our list. No top skateboarding list is complete with Santa Cruz Skateboards. It’s the OLDEST skateboarding brand in our list, founded back in 1985.

If you’ve not come across Santa Cruz Skateboards before, know this:

They’re distributed by NHS, who distribute Santa Cruz alongside Independent Trucks; arguably the best skateboard truck brand in the world.

That’s it for our rundown of the best skateboard brands in 2020.

Check out our list of the best skateboard decks here, or jump over to our skateboarding page for more tips and gear guides.